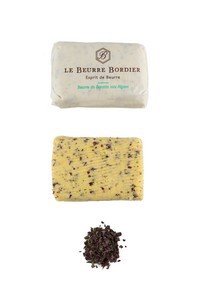 Thought up during a dinner with friends, 1986

A seafarer’s butter, it draws its intensity from seaweed filled with iodine, and colors your plates with its lovely tones of red, green and black.  An obvious choice for your seafood and shellfish dishes, it packs a real “wow” factor with a cut of rare red meat.

Jean-Yves Bordier was the first to create a butter with seaweed.  This first flavored butter in his collection came into being for a dinner amongst friends to go with the day’s catch, a brill.  The butter became nobility thanks to Eric Lecerf, Head Chef at Joël Robuchon.

The seaweed that we use is gathered by the coastal fishermen in Finistère, the most westerly département in France.  The seaweed’s lifespan is five months, which allows for two harvests yearly.  The action of tides and waves allows for renewal of the seaweed by ripping out the older plants leaving only the young “sprouts.”

The beginning of 2014 saw a lack of stock as all of the plants had been ripped off of the rocks by exceptional swells, gale-force winds, and 7 different storms concurrent with high tide ratios.  These storms struck after the winter of 2012-13 which was so overcast that there was not enough light to build up seaweed stocks in advance. Plants have to be washed in salt water and dehydrated at low temperatures (35-40°C or 95-104°F). 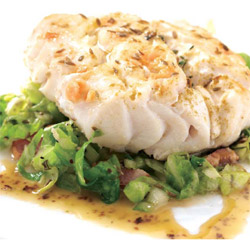