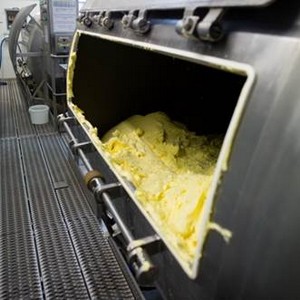 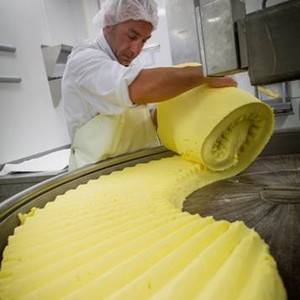 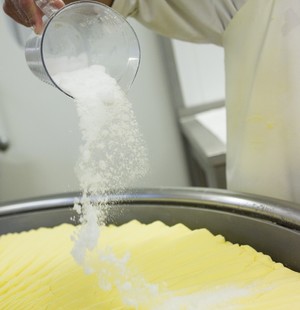 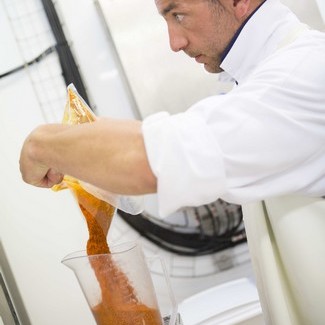 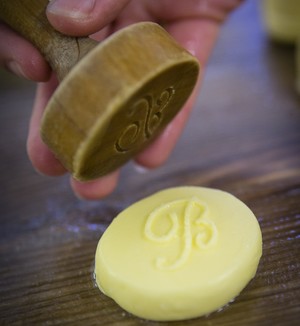 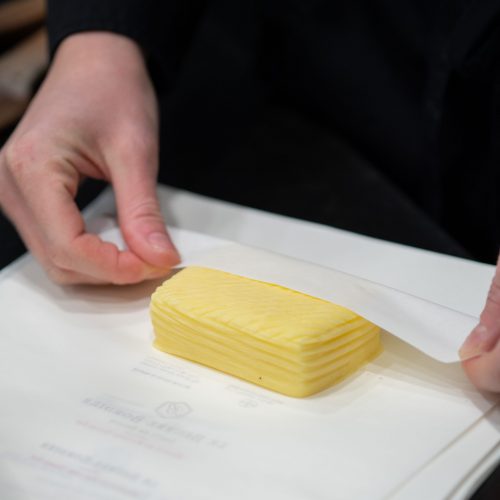 “Without cows, nothing would be possible”
The milk collected to make Bordier Butter is produced in both organic farms located in Brittany and Normandy.  In the summer, each farm pays careful attention to getting the cows out to the pastures.  In the winter, they are fed with excellent silage from aerated drying pens which preserve the quality of the alfalfa.

After collecting the milk, it is creamed and the cream is? pasteurized.  Then, it is left to mature slowly for two days to thicken and develop its aromatic complexity, that can be found in the butter.  For example in the spring, the aromas are very floral.  In the summer, they are more like caramel, and in the fall, more like toast.

The cream is then beaten in the churn, a cylindrical mixer which turns slowly separating the solids (the curds) and the liquids (the whey or the buttermilk).

The whey is then replaced by ice water before churning the curds again for a second time.

This traditional, artisanal technique is the only one which gives a high quality butter, much better than in a butyrater used in industrial butter, as more of the cream molecules are preserved in the butter.

Jean-Yves Bordier selects the finest quality churned butter made in Brittany.  This butter is left to rest for 24 hours before being brought into the Bordier workshop for kneading.

Kneading is a technique that dates from the end of the 19th century and served the purpose of both homogenizing and reworking butters coming from different production sites.  Almost phased out in 1975, Jean-Yves Bordier wanted to perpetuate and refine this know-how in his first creamery in the rue de l’Orme in St. Malo to give the butter back its original sensuality.

The butter is worked on by a man, the kneader, who acts as one with his wooden tool—also called a kneader—whose okoumé frame and wheel turn together slowly in opposite direction.  This open air kneading process lets the butter take on its own flavor through oxidation as well as softening its texture.  Only a gut feeling can decide when the butter has been kneaded enough.   Kneading times differ according to the quality of the butter, the temperature, the weather, the feed given to the cattle (silage in winter, grass and fresh flowers in summer), and the seasons:  around 25 minutes in the winter compared to only 15  in the summer.  It is only at traditional manufacturers’ can one still find a seasonal difference in production techniques.  “Butter is nature’s blotting paper,” underlines Jean-Yves Bordier.

* in stainless steel for unsalted butter and flavored butters.

During the kneading process, the butter is salted to taste with fine salt.  The fat molecules in the butter react and release the butter water.  It is said that the butter begins “to cry.”  It develops aromatic qualities, a depth and a complexity of incredible aromas as well as an elegant texture.

In Brittany, the butter was traditionally salted with fine salt, as fine as that obtained in olden times from boiling salt water in the St. Malo region, according to the tradition of Breton water boilers.  Jean-Yves Bordier chose to perpetuate this method to enhance the quality of the creams, the real taste of the pastures in the butter, and that comes through thanks to the salt.

During a dinner with friends, one a fishmonger in the rue de l’Orme and the other a seaweed producer in St. Suliac, Jean-Yves Bordier created the first flavored butter in his collection, seaweed butter, to accompany the day’s catch, a brill.

Since then, he has enjoyed creating new butters which magnify a recipe or even a simple buttered piece of cocktail bread.  His ideas come from his travels, his meetings with producers and chefs, and from inspiration in his own cooking!

“The hand is such a great tool…”

Churned, hand kneaded and salted, Bordier Butter is then hand-shaped using two paddles, whence the expression “pounding the butter,” a technique most likely created in the 17th century.

Our pounders require great dexterity and clockwork precision.  Their movements respect the butter and its texture, and are actually quite gentle.  It is then shaped into rectangles or mini-butters for use by great chefs.  Each chooses his/her own shape, weight, recipe and amount of salt that s/he wishes.

Some chefs have a seal or the name of their restaurant stamped on their butter, either for service or to welcome their guests.  This is a throwback to two 19th century traditions—one of farms manufacturing their own butters and which bore their seals to make them instantly recognizable, and the other a “welcome” slab of butter set out at the entrance of each farm and from which the passer-by would take a bit going past the farm.

Careful wrapping is the opportunity for our “little hands” to set imperfect bricks of butter aside.

The final step is for each tub of butter to be individually identified for current quality norms.